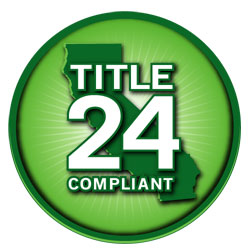 This is the first in a series of articles that will explore the impact of Title 24 on your budget, schedule, and design decisions. We’ll help you stay ahead of the changes & find ways to minimize the disruption.

For developers, architects and property managers, the most impactful – and costly – regulatory changes in a while are expected to hit with Title 24 in July and the teeth behind the change are sharp — piercing your budget and schedule. This Caliber Insights – the first in a series to clarify and offer guidance – looks at Title 24 and how you’ll be impacted by this change intended to reduce and control consumption via the installation of energy conserving technologies.

California has set wide sweeping energy efficiency goals and while the full realization of all the goals will take time, Title 24 is a building block intended to move commercial buildings toward zero net energy (ZNE). ZNE will be defined as a building with an annual energy consumption that equals their annual energy production. While new commercial buildings won’t be under pressure to realize the full ZNE dream until 2030, any commercial building alterations you are now planning will be swept into the requirements of the new standards which will be effective July 1, 2014. While it’s estimated a tenant’s energy costs from lighting will go down by about 8% in the long term, the more impactful immediate cost is estimated to rise between 40% and 100%.

Any TI projects or retrofits you are planning now (and to be finalized after July 201)that call for more than 10% of lighting be altered will trigger the requirement that the entire space meet the new standards – by adding sensors, controls and receptacle add-ons. This is a significant upgrade from the 2008 standards that only activated when 50% of the lighting was altered. And, lighting costs are estimated to increase by 100% — at a minimum. Your work in any building over 100 sq. ft. must have continuous dimming through one of the five means listed:

Lumen Maintenance: allows for a precise, constant level of lighting from the system

Automatic Daylight Controls: applies when over 5,000 sq. ft. and uses sensors to measure natural light in the space so powered lighting can automatically adjust.

Demand Response Lighting Controls (DRLC): required at over 10,000 sq. ft. and enables the power provider to remotely adjust down when demand is high. While the actual means haven’t been determined, the new code requires separate circuitry to allow for this future provision.

These spaces (over 10,000 sq. ft.)will have to include Demand Response Lighting Controls and kick in when 10% of the fixtures are being added, moved or modified.

Whether you build a new warehouse or retrofit one, DRLC will need to be bundled with a minimum of partial on/off occupancy controls and shut off controls. Lights must have the capacity to dim down by at least 40% when the space is unoccupied and each aisle needs to be controlled independently.

Security and Egress Illumination Modifications
The allowances from the past are now eliminated or drastically reduced including the prior code allowance for 15% of full lighting for security and egress. Title 24’s new standard now demands:

Offices will have some allowance for 24/7 lighting — in designated paths of egress — although it will have to reduce to a maximum of .05 watt per sq. ft.

The cost to meet the new power requirements (required only on new construction) are expected to grow 25% to 50%. All of the spaces going forward will require both controlled and uncontrolled 120 volt outlets. The controlled receptacles will have to follow the auto shut-off requirements of lighting and be differentiated from those that are uncontrolled.

Finally, conformance testing will have to be performed by Certified Lighting Controls Acceptance Test Technicians who will review completed projects for compliance – at a cost. In the end, prospective tenants will factor in the imposition of Title 24 in choosing a space, considering both the extended time it will take to comply with the new demands, and the costs to carry them out.